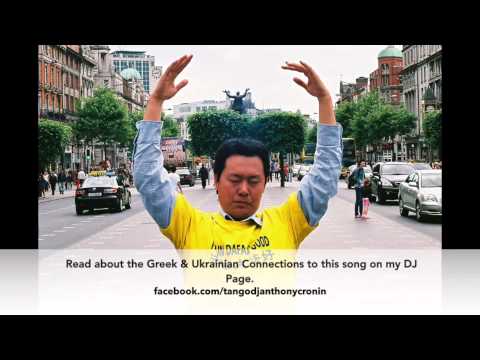 Inspiración as recorded by Aldolfo Carabelli with Alberto Gomez on 17th June 1932. This of course links sweetly with the previous posting here on Tangofolly (Adios Corazon) as the common link is Elvino Vardaro, the famed violinist who features here on this song so strongly and of course he played with Fulvio Salamanca’s Orquesta when it started (see previous post).

This was going to be about Vardaro but interestingly while researching I found we have one of the most famous tangos was a joint Ukrainian Greek venture. (I’m always looking for any Irish links still nothing, the Irish all went inland to farm 🙁 .

So back to the composers, one a legend, one a mystery. The lyrics are by one of the most prolific writers of the period Luis Rubistein whose parents moved to Argentina fleeing the rising anti-Jewish sentiment in the Ukranian city of Dnipropetrovs’k, (then Ekaterinoslav) with their first three children all girls, just in time to escape a pogrom. The second child born in BaAs was Luis. A streetwise stuttering character who felt right at home in the nightlife of BaAs in the 30’s.

His songs are direct, strongly themed with harsh cutting lyrics, his lyrics would never among the alumni of great tango poets, still their honest direct style resonated with the audience. His works were highly recorded in the early 40’s with songs like Carnival de mi barrio (Donato) , Tarde Gris (Troilo) , Charlemos (Di-Sarli), Ya lo ves (D’Arienzo) and Marión (M.Calo) to name but a few. He still managed to write all these great direct lyrics despite being kicked out of school for throwing an inkpot at the teacher!

Then the music with it’s Greek link by the son of Greek immigrants. Composed by Peregrino Paulos of whom little is known and a lot hearsay surrounds but makes for an interesting backstory. He and his two brothers were all involved in tango, he is variously credited with between 4 -6 songs, most famously this and the other classic “El distinguido ciudadano” (Di-Sarli’s version is well known). Interestingly his kid brother who only has 2 songs to his name, wrote “Loco” also recorded and made famous by Carabelli.

In an interview the famous conductor Manuel Pizarro intimated that in fact it was the more sensitive younger brother Neils-Jorge Paulos who composed the songs Inspiración and El distinguido ciudadano but were published under his older brother’s name as he was too young at the time.. more mystery. 🙂

Whatever sibling wrote it, Paulos died in 1921 and it is only because of the great Roberto Firpo in 1922, who titled an album Inspiración in his memory and later Peregrino’s friend Augustin Magaldi who recorded Inspiración in 1929 which fixed a Greek link to the tango map forever.

Enjoy, Enjoy the sound, listen how the rest of the orquesta are humble to the brilliance of Elvino Vardaro’s violin, Enjoy some Inspiración ..