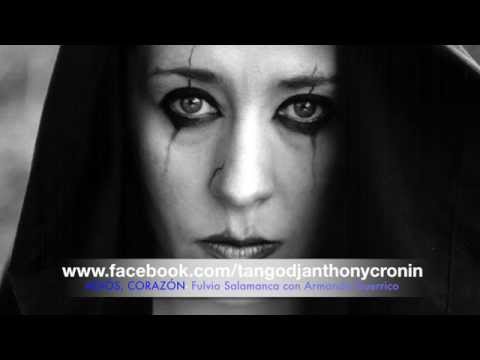 Adiós, corazón recorded on 29-11-1957 by Orquesta Fulvio Salamanca with Armando Guerrico on vocals has an interesting story behind it. This was the song that became the ‘sound’ of Fulvio Salamanca.

Fulvio was Juan D’Arienzo’s piano player the fateful day Hector Maure turned up for the audition nearly the last candidate and it was a tired Salamanca’s sudden change in energy and enthusiasm for Maure that carried the day apparently and we are forever thankful for wonderful D’Arienzo con Maure songs.

Fulvio had faithfully been D’Arienzo’s piano player from 1940 -1957 when he decided to set up his own orquesta with bandoneonist Eduardo Corti. They had their debut on Radio Splendid such was the respect they were held in. The orquesta were still searching for their signature sound cautious not to sound like D’Arienzo which is what everyone would be listening for and they knew it. They spent long hours trying to work on a unique sound.

It was at a dinner party during this time, where Armando Guerrico happened to be singing casually this song “Adios, Corazon”. Fulvio heard him sing and the song and immediately set about trying to find the authors who were unregistered on SADAIC and in Uruguay. Luckily Fulvio had a lot of friends there and after several phone calls to Montevideo they were tracked down and agreement reached. Fulvio did the arranging on the song and added the violins at the start to the score and we suddenly had the new signature sound. He also had his key singer and along with “Mano Cruel” “Adios Corazon” was the first two sides Armando Guerrico cut with Fulvio Salamanca in the recording studio.

Also for the first year of this Orquestra the violinist was none other than the legendary Elvino Vardaro who had been persuaded to join by Conti but more on him another time.

Enjoy the ever more popular Fulvio Salamanca with one of his iconic recordings. 🙂

Post a new comment on the story: Adios Corazon – the song that launched the Salamanca signature sound