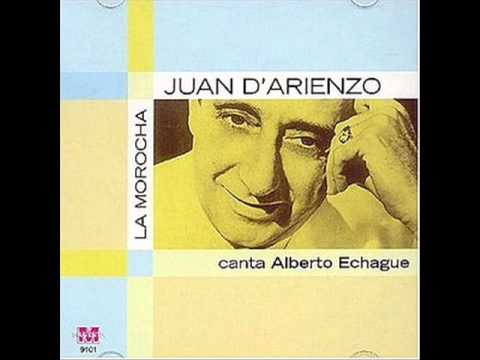 A post on a tango forum recently where someone complained referring to certain music as “B-side Shite” inspired me to have a look through my collection and dig out the B-Sides that are magical.

It is late 1939, mid-November when the recordings for matrix numbered by Victor as 38887 was laid down in the studio. It is the peak of the relationship between Juan D’Arienzo and Alberto Echague, a relationship that started around January 1938. Between regular spots at the famous Chantecler Cabaret, spots on Radio Mundo and tours in just under two years they also laid down 27 tracks, this is the 25th or 26th track depending on how you count them. In just over a month and probably shortly after Christmas Echague had gone. The first golden period of his collaborations with D’Arienzo was over.

The song was composed by Juan José Visciglio and this is only one of two compositions Visciglio is known for, all others lost in time or never getting to print, we don’t really know. This other song is also a D’Arienzo with Echague classic. ‘’Pensalo Bien’’ (Think well) recorded in June 1938 and widely attributed as a warning shot to Biagi about leaving and forming his own Orquesta. Biagi left soon after and by September 16, 1938, Biagi’s new Orquesta made its debut at the cabaret Marabú. The lyrics to both songs were largely written by longtime D’Arienzo friend and established lyricist Nolo Lopez.

So, we have a lot of departures linked to this song that ended up on Side B of the shellac but today rocks the floor and is known by all. Echague left because he was tempted by Juan Polito to join his new Orquesta and they had a successful four years but of their collaboration, no recordings exist. Echague’s next recording is the 7th July 1944 and marks the start of his second and longer period with D’Arienzo.

The A-Side is the classic driving Vals “Ay Aurora” with Echague on vocals, the last track of this period the two recorded on 22nd December 1939 is a driving floor filling favourite too called Trago Amargo. #BSideMagic #tangoclassics