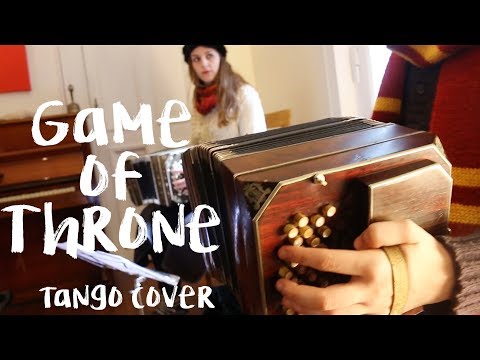 This is fresh from Buenos Aires, a group taking advantage of a popular TV score and converting it to a tango. Well the first part is Vals then changes to tango! Game of Thrones Tango Cover – SEXTETO ANDIAMO

There is no doubt some purists out there reading this and watching the video will be sticking their nose in the air with grunts of disgust, speaking of ”treachery”, ”not real tango”, ”not traditional tango”.

Maybe a small piece of history might help open their minds a little. Long ago there was a wee gentleman who had an Orquesta in Buenos Aires, he was also a cunning wee business-man and always tracked the successful movies that usually were a hit in Brazil first before finding their way to Buenos Aires. At which time he would release a tango version of the most popular song and capitalise on the movie’s popularity.

This was quiet common practice to convert popular tunes and not just those from the movies. The hottest songs in America on the ‘Hit Parade’ often got converted into multiple styles including tango, within months of the original hit, the record companies were also key in this.

One example that springs to mind is the popular ‘tango vals’ Ti-Pi-Tin , this was composed originally in Mexico by the ‘Queen of the Bolero’s’ Maria Greever (1885-1951) a famous composer in her day see the picture. By 1920 she was already in Hollywood composing for the big studios like Paramount Pictures and 20th Century Fox. Such was her fame that a movie was made of her life starring non other than that delightful tango chanteuse and famous actress Libertad Larmarque.

So Ti-Pi-Tin was first recorded in Feb 1938 by Horace Heidt and his Brigadiers (with Larry Cotton, Lysbeth Hughes & glee club on vocal) and spent six weeks at the top of the USA hit parade. You can hear it here https://youtu.be/Y3Hyfz4n7XY

Word spread to Argentina in early 1938 and our wee Gentleman friend must have heard this and decided to capitalise on it’s fame. Of course, like every good story there is an arch rival. So, he must have been quite annoyed when four days before him on the 22 July 1938 Francisco Lomuto released a version with Jorge Omar on vocals. https://www.youtube.com/watch?v=6IYDRqYCXic

The wee Gentleman is none other than Francisco Canaro of course and his version is here released on the 26th July 1938. https://www.youtube.com/watch?v=3iTb32n6xic

I have written previously about Canaro’s habit of recording famous songs from movies here is another example and a fun tune. https://www.youtube.com/watch?v=cpFhj0lEfjs

and for my German friends by Gerti Landmann in 1946 can’t find a copy of this though.
So, in conclusion, enjoy this exciting new song for what it is part of the tradition of Argentine Tango and it’s development.

Many thanks to my friend Christian Martinz in Buenos Aires for the tip off to this song.

The Tango Lesson commented:
Thanks for the fun, Anthony.  We’ve often wondered which direction “Isle of Capri” and “The Anniversary Waltz” came from.  And why do the old MM cartoons sound like old milongas?
Posted 26 Aug 2019 @ 02:19 | Last modified 26 Aug 2019 @ 02:19 | View and share
Yes. Delete this forever
Comment on this story