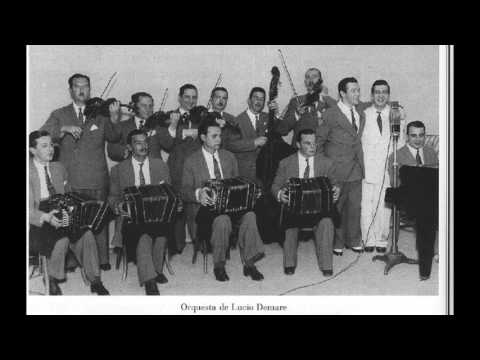 Another tango mystery man, This time, the one hit wonder singer, Carlos Bernal. A cursory searches of all the usual sources has not even produced a snippet of information. Yet here he is on the sole recording he seems to have made, immortalised and practically forgotten.

In the studio’s of Odeon on the 11th June 1945 the orquesta of Lucio Demare gathered with two singers to lay down the tracks of the day. It had been over three months since the last visit and all previous recordings in 45 and as far back as January 44 were with solely the then lead singer Horacio Quintana. Firstly a little backtracking to understand why this song is important in the history of Lucio Demare and his career.

Demare’s recording career for his own Orquesta begins in 1938 and slowly builds to a purple passage of consistent output. These were the years 41-43 with Raul Beron and before him Juan Carlos Miranda singing. In this period he recorded around 50 tracks, with Roberto Arrieta being part of this period also, so three key singers.

The Orquesta output was nearly two sides cut every 6 weeks on average in this period. It should be noted Demare in all this period 1938 -1945 wasn’t too partial to instrumentals and cut just six in all those years, so singers were key to his philosophy and personal taste. The last song of this bountiful 41-43 period was with Raul Beron in January 1944 and then we see the start of the new name of Horacio Quintana as the cantor.

When they gathered in the studio that June 1945 day Horacio Quintana had cut 13 sides in total (possibly 14), ten of those in 1944. So this was already less frequently than the previous years.
This leads us up to 1945. The Orquesta had only been twice that year to the studio to cut 4 songs (two shellacs).

This is a serious reduction in output when outside in Buenos Aires, tango is on the crest of a popular wave. Why? I find myself asking, was it that they were so busy with the residences, carnivals and touring? This track gives us a possible clue and explanation, if you add what we know about Demare’s philosophy about his ‘art’ being more important than anything else.

The original shellac that came out had this song “Más allá de mi rencor” as the “A” side featuring the new voice of Carlos Bernal and the “B” side was “Nos encontramos al pasar” with Horacio Quintana. The B Side track is by far better known these days than the original A side. There is no mention of Bernal before this point anywhere. A new voice is being tested in the studio but must have been performing for a while before this as recording was very expensive.

The theme of the song is dark and bitter lament at tango and the pain it brings to one’s memory, opening old wounds. The words were written by Julian Centeya, the famed Lunfardo poet of the Barrio’s who also wrote lyrics to some of the most timeless tangos. Centeya is as much a part of this time as Troilo’s Bandoneon. He was hugely popular and seen as almost part of the city it was felt as if all Porteno’s owned him and his words, like they owned their streets.

When I listen to Bernal’s voice coming in after such wonderful Demare piano frills and switching back and forth between rhythmic and lyrical phrases the voice is missing something for me. Although not offensive he lacks the sharpness and depth to carry the lunfardo words with a gravity to suit Demare’s arrangement. If you listen from 1.40 onwards he seems to struggle as a singer to keep the timbre in his voice as the words flow. I would be curious to know do you feel about his delivery?

Demare’s perfectionism is well known and recorded, with an strong ethos of art before commercialism. This might have been the final straw and why he disbanded the Orquesta soon after this recording. Demare almost immediately reformed with his former Trio colleagues from the period 1928-1935 and headed off on tour. He is not seen recording again until the early 50’s. As for Carlos Bernal, the last voice of Demare’s Orquesta we never see his name again. For me Carlos Bernal is the silver bullet that killed a sound.

If you enjoy this research please wander over to my facebok page and “Like” and please feel free to share. Comments welcome as this history is for sharing. Thank you

As always the records from these days are not complete so there might be some inaccuracies present but I try to cross check all available facts.